Give Mate, Or Else Material May Be Too Scarce

In the men’s tournament the leaders’ situation is the same as before: Russia is one point ahead of China, and in the next round those teams are going to face each other.

Russians bested Poland, whose players were unable to stem the onslaught on even-numbered boards. With his move 22 Gajewski, who played against Fedoseev, had attempted to prevent opening of either f- or g-lines, but his continuation  allowed White to break through along the outside file. Critical for the success of his operation was vulnerability of the far-advanced pawn on g5. Black king’s flight into the center served only to shorten the game.

Nepomniachtchi and Duda were involved in sharp play on the opposite flanks. In the position where Black had at his disposal a variety of means of holding the balance, Polish grandmaster got carried away with elimination of enemy’s infantry and missed a simple blow. As a result, White, after obtaining great material advantage, developed a decisive attack. 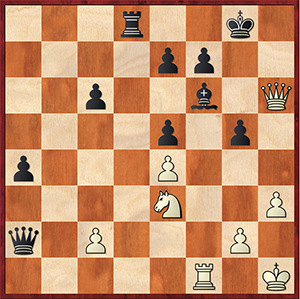 Duda had just taken on а2 with his queen and ran into Nepomniachtchi’s retort 32.Rxf6!. Black cannot capture the rook because of Nf5, and his counterplay along the 1st rank is reduced to several inoffensive checks.

Matlakov employed a benchwarming idea in the Zaitsev Variation of Ruy Lopez, obtaining quite a promising position. However, he had failed to make use of all his chances and Piorun managed to equalize by means of tactical tricks. After having made several inaccuracies in his ending against Wojtaszek, Svidler had to sacrifice an exchange in order to escape. White was unable to convert his material advantage into a win because of lack of material left on the board.

A single victory turned out to be enough for China in their match against Ukraine. Ding Liren was more accurate than Ponomariov in a popular structure of the Najdorf Variation. Black pawn impulsive advance on the move 29 resulted in its quick loss, and White’s decisive advantage was determined by a difference in the levels of kings’ protection.

Remaining games were tied without any great adventures.

Turkish players lost their first game of the championship. Can failed to withstand Sasikiran’s positional pressing and by the control move gave up his two pawns for the one White had sacrificed in the opening. Then he lost in the ending that was probably defendable, should Black push his knight forward to d3 on the move 45.

The match was saved by Yilmaz and Dastan. The former had surpassed Adhiban in the opening preparation and had an extra pawn by the move 25. He had thrown away a considerable part of his advantage by exchanging queens, though, but soon rode a high horse again after the Indian had erroneously transposed into the knight-versus-bishop endgame.

In spite of being a pawn down in his game against Negi, Dastan kept retaining an acceptable position in the ending, but then let the enemy passed pawn advance too far, and his position became critical. 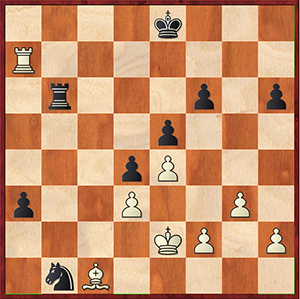 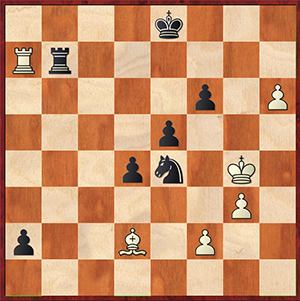 Belarus won their first match of the championship, having smashed Norway 3.5 to 0.5. On the top board, Tari was inaccurate in his handling of Closed Caro-Kann, forgot about his king, and Zhigalko blew up Black’s pawn defenses in the center with his exchange sacrifice. In the thrilling King’s Indian endgame, Kovalev’s bishop pair and a remote passed pawn proved to be stronger than Urkedal’s khight, bishop and central pawns, though on the move 42 White probably had a subtle opportunity to draw. Also in the King’s Indian, Fedorov gradually outplayed Elsness and, having occupied the central file with his rooks, created decisive threats on the K-side. Salomon could have scored a “consolation goal” but, after obtaining a formidable attacking position against Aleksandrov, made an obviously bad bargain by trading off queens.

Americans overcame Egypt 3 to 1. By means of a standard Sicilian knight sacrifice on f5, Robson quickly beat Abdelnabbi, who had misplayed the opening. Apparently, Hesham had been so badly confused with Shankland’s castling in a sharp position on the move 33 that he made a fateful mistake immediately. On the move 29 Fawzy, being tempted with capturing the rook, failed to carry through his mating attack, allowing Akobian to slip away with a draw eventually.

In the women’s championship, the tournament situation did not undergo substantial transformations as well: Russia and Ukraine head the table, with China trailing by two points.

Home team had no problems against India. Vidjayalakshmi’s handling of the opening was so indifferent that Girya was a piece up in a completely quiet position as early as on the move 17. Another winning point for Russia was supplied by Gunina, who managed to outwit Padmini. 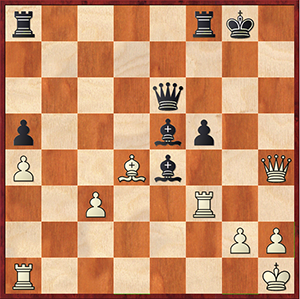 Ukraine had much more to worry about in their match against Azerbaijan. On the last board, Buksa was slow in development and failed to save a worse endgame against Balajayeva in spite of the notorious tendencies of the rook endings. Osmak managed to hold out a very suspicious-looking position against Fataliyeva. Mammadzada outplayed Gaponenko in the Maroczy System; White’s pressure on the K-side resulted in the win of pawn, but on the move 33 she overlooked a combinational opportunity connected with undermining of the e5-knight’s strong position. Subsequent time-trouble errors resulted in letting the opponent create an additional strongpoint on g4 for the knight. Due to that Black had won an exchange, and the rest was a matter of a simple technique. The score was 1.5 to 1.5 when Zhukova managed to break Mammadyarova’s resistance in a double-rook ending and clinched a victory for her team.

China bested team USA 3:1. Tan Zhongyi’s superiority in her game against Foisor had become quite obvious after Black allowed the opponent to annihilate his king’s pawn cover. Nemcova was careless in the level endgame against Lei Tingjie, allowing her opponent to win an edge pawn, while failing to create decent counterplay in the meantime.

Georgians defeated Vietnam by the same score. In the end of time-trouble, Vo missed an excellent chance to set stubborn problems before Khotenashvili; after that the wheel of fortune started turning in the opposite direction. Practically during the whole game Nguen vs. Melia, Black pieces were better placed and cooperated in a more harmonious manner, which led to a logical outcome slowly but surely.

Poland won their match against Egypt 3.5 to 0.5. Once again, Wafa managed to distinguish herself in the outsider team: there was not a moment in her game against Zawadska when the balance was seriously disturbed. For a long time Socko’s position looked precarious, but just before control Mona gave up her attack for an extra exchange in the endgame, then ceded an important pawn immediately and found herself in a lost position. Szczepkowska just plain blundered and had to play without a pawn for about 20 moves, but in the end Moaataz was ruined both by her nerves and weakened position of her own king.

In the 7th round Russia takes on Poland, while Ukraine plays against Egypt.