In between broadcasts, the press-office of the World Team Championships in Khanty-Mansiysk managed to speak to the commentators of the tournament. The hosts shared the secrets of their work, talked about the growing popularity of chess and made us look at players from a different perspective. 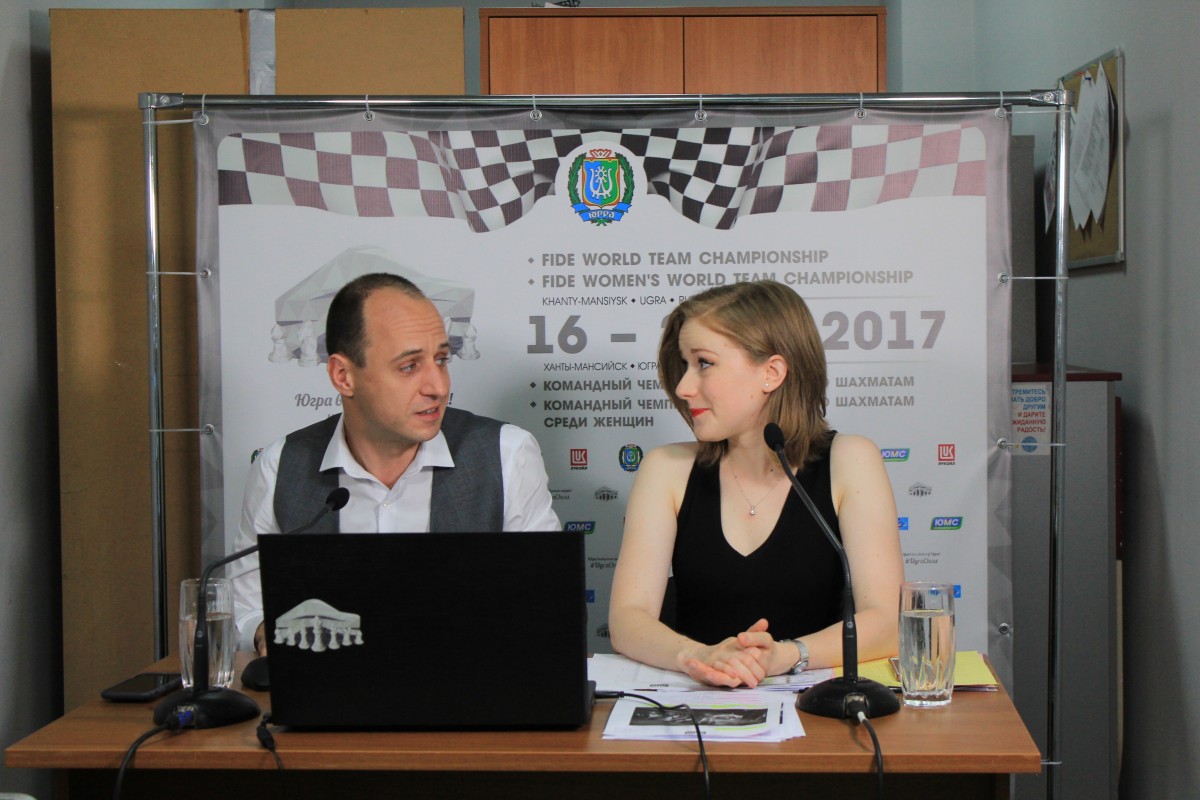 Attending Khanty-Mansiysk the commentators settled within the walls of the Ugra Chess Academy. By the opening of the first round, the cozy office was provided with the usual equipment – camera, microphone, computer and of course good mood.

«I think the first day is always the most challenging. It’s not only the players that need to get into the mood of playing but also the commentators, we need to get used to the new location, new system, new people. Of course we already know 99% of the players, but some of them are still unknown to us, – say the hosts. – We are very happy with the location, such a huge and modern chess academy. It’s nice to work here, knowing that it’s all about chess». 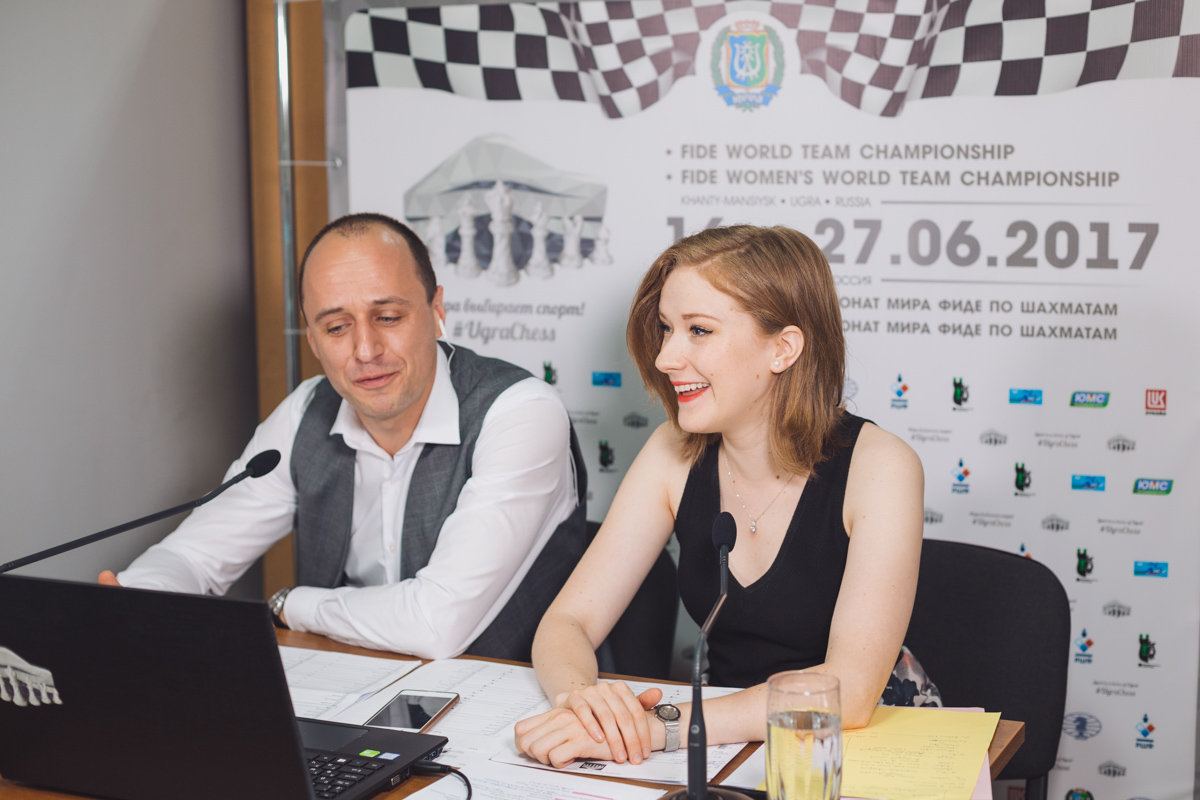 Contrary to popular beliefs, most commentators do not use computer systems in their work. Artificial intelligence allows indicating the most advantageous moves in just a second; however, according to Evgenij and Anna, chess is not all about dry calculations.

«We don’t have any outside help. Оne brain each, that’s all we have.We want to give people a hint of what players are thinking during the game. Chess has not an entirely right image of being a game of calculation because you see a few possibilities and then have to choose. It is a matter of choice. One move gives me a solid position and some chances to play, another maybe a better move objectively, but quite messy», – Еvgenij notes.

According to commentators, it is important to show the human side. Watching the game, the hosts do not always note the best solution, but their lively discussions and detailed explanations attract thousands of chess fans to the screens.

«It’s a game for humans first of all. You don’t learn anything by simply pressing the buttons the computer suggests. The engine gives you the move but it will never explain the ideas to you. If you are a good chess player yourself, you will be able to figure it out, but for people at home, the club-level chess players, it is difficult. They need this way of commentary to understand what’s going on», – believe the partners. 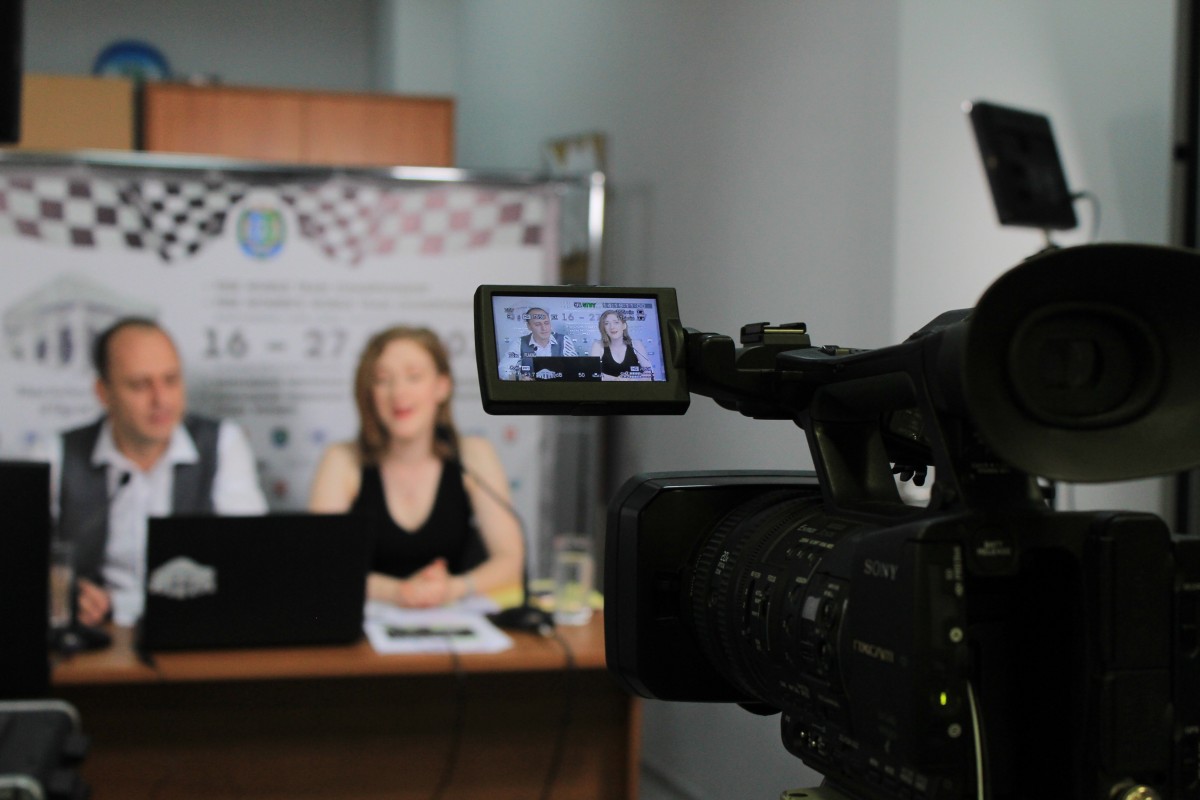 In addition to the chessboard, much attention is devoted to the players themselves, their emotions and feelings. Most professional chess players try to keep a poker face, not allowing the opponent to determine their current mood. However, skilled experts are able to read even the most undistinguished gestures.

«Sometimes it is possible to predict the move if we know the style but that’s a rare case. For instance if there are two moves of which one is more aggressive and you know the player tend to have attacking style», – Anna explains.

«Style is one thing; the mood in a current moment is another, – Evgenij adds. – I might be a brilliant attacking player and all of a sudden today, I feel like it is a day to play solid. There is no general recipe on this. You can certainly see if someone is disappointed during the game, that he is not happy with his last move or position on the board».

As noted by the hosts, a lot of psychology is involved in chess. Not only experience and logical thinking affect the outcome of a game. Even having a good position a player may be insecure just because he had a bad night. And the other way around: the confidence of a chess player does not always indicate a successful game. Perhaps he is not aware of his mistake or plays mind games. 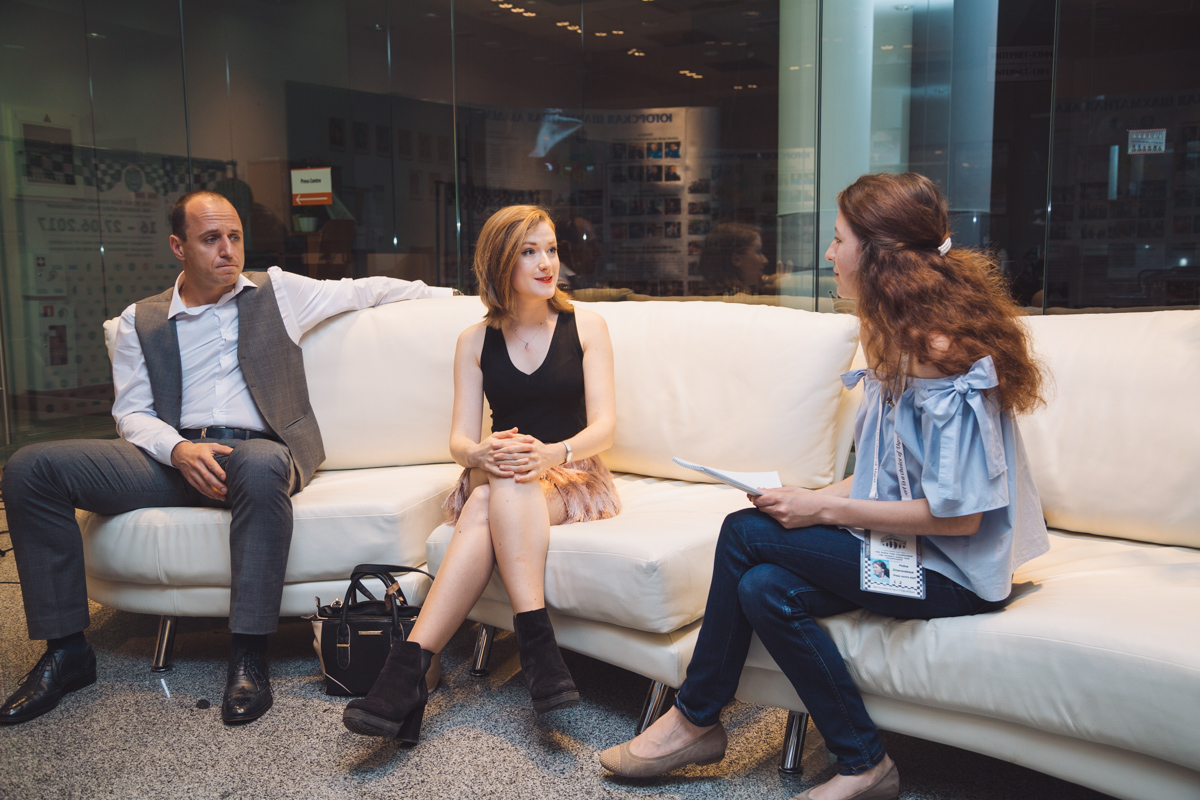 Commentating for many hours straight the hosts not only mention moves, but also explain ideas and strategies, discuss critical positions and review in detail all possibilities to change the character of the game. Daily 40 intellectual battles take place in the World Team Championship playing hall. Anna and Evgenij are closely watching each of them still managing to analyze the moves of both parties and mark the highlights.

«It is a different kind of thinking when you are playing. You put all your attention into that one game, so you see everything in a much deeper level. When you are commentating, you need to be very quick in changing from one position to another, but it also means that you cannot really deepen in any position, – says Anna. – You should be thinking and talking at the same time. That is challenging. You cannot pause for one minute thinking and then continue.

The commentators are convinced – solving such problems is much easier together. By working in pairs, the hosts make entertaining dialogues and if necessary allow their partner to make a short pause.

«With Anna we make a very good pair, our energy levels complement each other. It is good to have a partner, especially when you are in front of a camera on air. Everything you do is seen, you don’t even have a single second to be out of the show. That is why it’s so important to have a person with whom you keep going all the time with the same energy and same entertainment level», – Evgenij says. 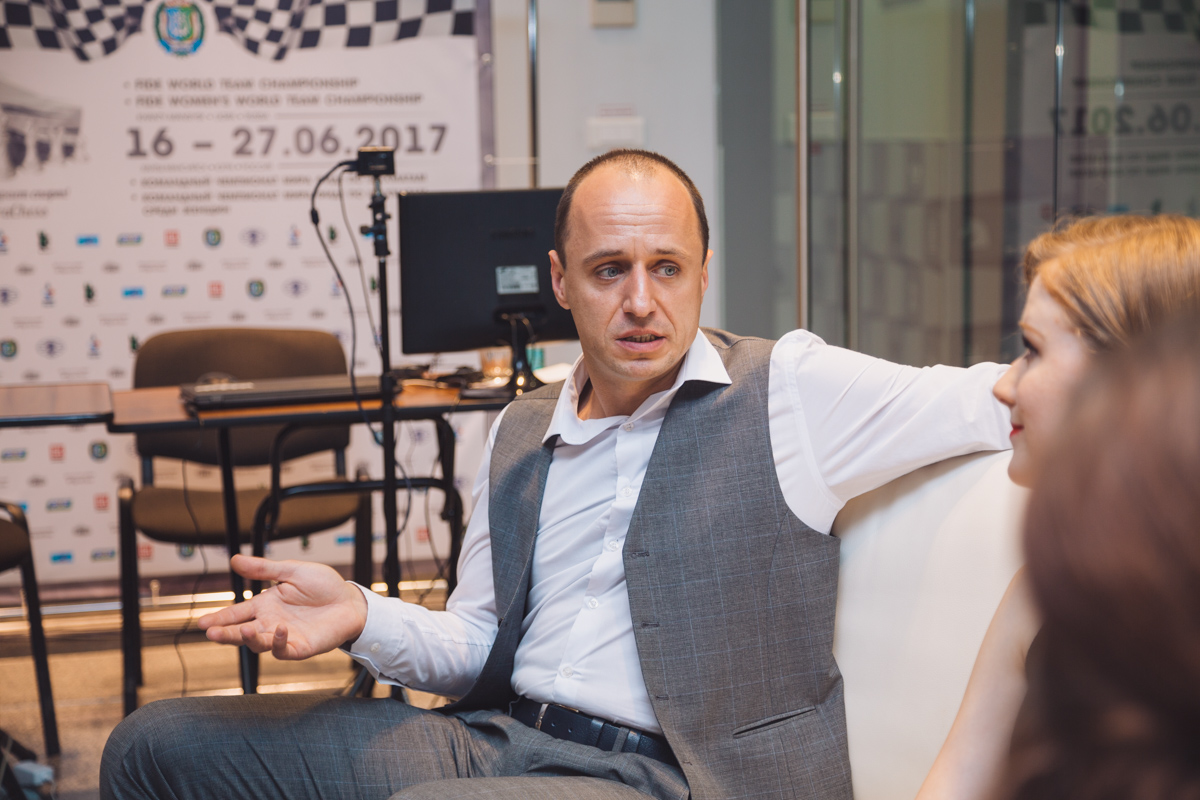 Live broadcast always involves communication – both between the hosts and with the audience. Chess fans all over the world are discussing the current World Team Championship. Using hashtags #ugrachess and #wtcc2017 on social networks, fans talk about exciting games, unexpected results, or simply support their favorite players.

«Мany fans from the participating countries can watch the broadcasts for hours, also there are fans that love chess so much that they follow everything on social media. They may be not that loud as soccer fans, but they are very enthusiastic and supporting», – the commentators remark.

Chess is rapidly gaining popularity across the world, year after year this intellectual game attracts more and more interest. Our hosts are sure – knowledge is the first step to popularization. To follow chess battles, first you need to learn the basic rules of the game.

«Chess used to be very popular in the 1970-80s, maybe thanks to Bobby Fischer and those Karpov – Kasparov matches. Then we started to lose the fight to computer games. Some time ago chess was one of the few strategic games available. Now people started to realize that chess has its benefits, – Evgenij sums up. – To make it more entertaining as chess players we have to agree on playing faster games. Broadcast is also a very nice thing compared to how it used to be. Making chess a subject in school can also make it more popular. That way we will get more people that not necessary are chess players but at least know the rules. You cannot force people to like the game; you just have to make it more interesting».