Capture of the Fortress

Poland beat Egypt 3 to1 and moved into the sole lead. Hesham in a roughly equal endgame against Wojtaszek needlessly indulged in complications and first lost a pawn and then allowed black passed pawn to queen. Duda outplayed Ameir in a well-known variation of the Benoni Defense, in which Black sacrifices an exchange. After the Egyptian player traded off his light-squared bishop on his own free will, his Q-side had lost an important defender, and the Polish grandmaster freely developed his decisive initiative on this sector of the board.  Farahat could have tried to close the gap, but, having obtained a clearly better position against Gajewski, he agreed to a draw.

The outcome of the Russia’s match against Ukraine was decided on the 2nd board, where Nepomniachtchi defeated Korobov. In the complicated Sicilian position Black made a serious blunder on his move 22. As a result, White demolished the cover of the centralized enemy king with a knight sacrifice and launched a mating attack. The engine thinks that he could have managed with purely positional means, though. The struggle on other boards was even, and the result is 2.5 to 1.5.

In the match USA vs. China all games ended in draws, and Yu Yangyi – Akobian  signed their peace agreement in the most interesting moment – immediately after White had sacrifices a piece. However, given logical development of events, he had every right to figure on adequate compensation.

With Li Chao and Xiong, the balance in the rook-and-two-pawns-versus-two-pieces endgame could have been instantly disturbed with a study-like subtlety. 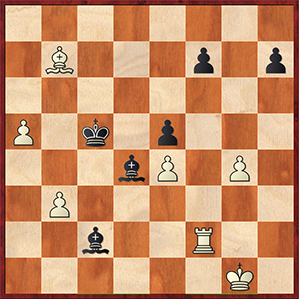 After 35.g5!, White’s position is won: if 35…Bxb3 36.Bd5, then Black is unable to transpose into a pawn-up ending, and the bishop one is also lost for him. Li Chao had advanced his g-pawn only two moves later, thus wasting precious time, and Xiong saved half a point.

Adhiban, who had lost in the first two rounds, today supplied a winning point to India in their match against Belarus. He outplayed Kovalev in the classic style of the hedgehog system. After a breakthrough in the center, black pieces placed on the back ranks started creating unpleasant threats; White had weakened his king’s position and soon let a decisive blow come through. 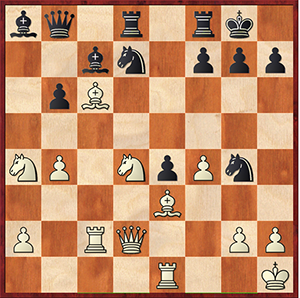 Zhigalko, who had an extra pawn against Vidit, missed a real chance to even the match. After several inaccuracies, his advantage vanished into thin air.

The very first decisive game with the participation of Turkish players gained them a victory in their match against Norway. By giving up a pawn, Sanal managed to obtain counterplay on the kingside. Then, in the time-trouble frenzy, he sacrificed a piece, and with his control move Elsness committed a fatal error, overlooking a beautiful mating idea.

In the women’s tournament team Russia failed to defeat Azerbaijan, thus letting Ukraine to catch up with them.

Gunina’s undoing in her game against Mammadzada was her lack of patience in a typical Caro-Kann position. She had given up the important g7-pawn, and though later her opponent had granted her a chance to improve the situation, after overcoming a time-trouble Black found himself several pawns down in a hopeless ending. As a result of choosing a wrong move-order, Goryachkina lost an opportunity to gain a decisive advantage against Mammadova. The match was saved by Girya who was waiting for Fataliyeva’s error until the control was over.

In the match India vs. Ukraine, both parties exchanged favors on the odd-numbered boards: Harika failed to cash in on her extra pawn against Ushenina, and Osmak threw away her great positional edge in her duel with Karavade. The outcome of the match was decided on the 2nd board, where Sachdev failed to hold the fortress in the two-minor-pieces-versus-rook-and-outside-passed-pawn endgame against Gaponenko.

China won their first match. Lei Tingjie gained a decisive advantage against Vo after the Vietnamese player, tempted by a win of a pawn, had opened the h-file for the white rook. Ju Wenjun was very skillful in the matter-of-technique many-piece endgame against Pham. The “consolation goal” was scored by Hoang who had broken through Tan Zhongyi’s blockade on the point d5 in an excellent style. In the technical stage she was far from faultless, but, in all probability, the World Champion had already psychologically resigned herself to a defeat.

Confrontation between Poland and USA did not determine the winner. Foisor beat Szczepkowska in the King’s Indian structure after the latter’s untimely advance f6-f5. In the most complex Sicilian clash Kulon – Yu the Polish player managed to tip the scales in her favor after an unobvious Black’s mistake on the move 23.

Georgians have shut out Egypt and will face Russia in the fourth round. Ukraine is going to take on Vietnam.

Main encounters in the men’s tournament will be Poland vs. Turkey, Belarus vs. Russia and China vs. Egypt.