In the men’s tournament, team Turkey keeps on showing enviable tenacity for the second day in a row, refusing to allow favorites to “score a goal”. Svidler, a top board player for Russia today, who had White against Solak, preferred to avoid main King’s Indian schemes and in a complex middlegame position chose repetition of moves. On the third board, Can managed to neutralize Matlakov’s attempts at building up the initiative in a more popular King’s Indian line and just before time-control sacrificed an exchange, forcing perpetual check. 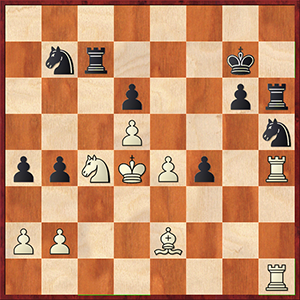 Yilmaz and Vitiugov played out a draw that is well-known from theory. At one point, Fedoseev seemed to have real chances to tip the scale in favor of Russia, but Sanal’s defense in the minor-piece endgame had been solid, and he managed to escape into a drawn queen-versus-queen-and-knight ending eventually. The final result is 2:2.

In the most hotly contested match of the round, as evidenced by seven half-liter bottles of water emptied by Li Chao during his game, China came out on top of India thanks to Yu Yangyi’s victory over Adhiban. As on the day before, the Indian player was not careful enough in handling his pawn structure. Those inaccuracies allowed his opponent to take over the initiative, and when White had left his king unattended in the endgame, Chinese grandmaster’s advantage became decisive. All the other games lasted for more than 50 moves and were deadlocked. For all that, Sasikiran had excellent chances to save his team from defeat, but drove his rook into offside in a position with a healthy extra pawn, and Wei Yi’s ingenious play allowed him to equalize.

Poland defeated USA by a hair. Wojtaszek made up for his yesterday’s loss by beating Shankland, who had been overoptimistic about consequences of the exchange operation in the center provoked by Black’s move 13. As a result, the American grandmaster’s light-squared bishop found itself under fire, which, in combination with weakness of his king’s position, led to a quick outcome. 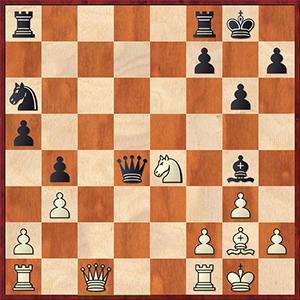 19.Qg5! The bishop hangs, and there is a threat of check on f6 with a win of an exchange.

19…Be2. Now the bishop does not hang, as for the moment the a1-rook is under attack; however, black pieces are so badly placed that they are unable to benefit from the available tempo.

Games on the second and third board were uneventful and ended in draws. On the 4th board, Bartel’s handling of an opening against Xiong was risky, but he managed to save a pawn-down ending with his skillful defense.

Norway exchanged heavy blows with Egypt on the even-numbered boards – in both games one of the parties had a clear superiority, and in both the opponents capitulated on the move 24. But on odd-numbered boards Scandinavians dominated, even though Tari, who had an overwhelming position with two extra pawns against Hesham, had overlooked the opponent’s tactical trick just before time-control and had to be content with a draw. On the contrary, Salomon managed to exploit Ameir’s weaknesses one by one and handed a 2.5 to1.5 victory to his team.

In the match Belarus vs. Ukraine all the games were quickly drawn. Leaders of the men’s championship are China and Poland with 4 points each. Russia trails by one point.

In the women’s tournament the home team leads, outstripping Poland, India and Ukraine by one point.

Goryachkina and Gunina shone in the Russia’s match against Vietnam. On the fourth board Luong, tempted with an attack against a weak pawn, had crippled her king’s position in a decisive way, and Aleksandra obtained great material advantage. Valentina managed to lure Nguen into exchange of blows; Black neutralized mating threats by sacrificing a piece, and in the resultant complicated endgame Gununa played stronger, making a perfect use of her outside passed pawn. A draw in the well-balanced game Pham – Kosteniuk had clinched the match, and then Lagno managed to save a difficult ending against Vo. The result is 3:1.

China took the lead after the World Champion’s win over Zhukova. Having run into time-trouble, the Ukranian player opted for concrete play and overlooked the variation in which Tan Zhongyi trapped the enemy queen with a quiet move. 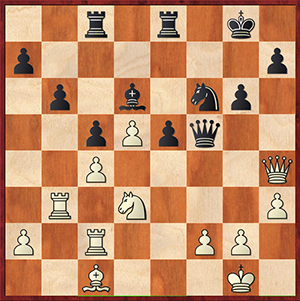 And on 29…Qd1 there followed 30.Kf1! The knight is under a blow, and there is a threat of Rd3. Black suffered great material losses and resigned after time-trouble was over.

However, on the 3rd board Lei Tingjie’s careless middlegame move had resulted in the loss of a pawn; in the ending Gaponenko won a piece, elegantly employing tactical motives, and evened the match. 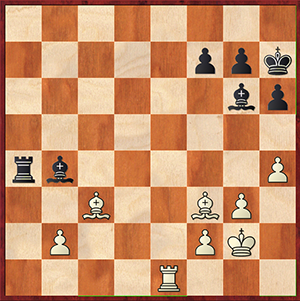 The game between team leaders Ushenina and Ju Wenjun was played in an academical fashion and quite logically ended in a draw. On the last board, Osmak succeded in defending a passive and unpleasant position against Guo Qi.

Reigning World Champions had led two to nothing in the “bloody” match Georgia vs. Poland, but failed to win. Dzagnidze outplayed Socko in an excellent positional style. In the Yugoslav Variation of the King Indian’s Defense White carried out an exemplary flank invasion on the Q-side. The outcome of the game Zawadzka – Khotenashvili was decided by White’s terrible blunder on the move 36, after which the Polish player was left a piece down. Still, team Poland was constantly keeping in mind a potential point on the 3rd board, where Batsiashvili had handled the opening indifferently and with her move 16 allowed a temporary piece sacrifice that resulted in an enormous black advantage. Although Kulon had not always been precise during realization, it was Georgian player who made a final error. In the game Majdan – Melia, both players had been eccentric enough in the opening, which led to an interesting middlegame. Despite certain slipups, the opponents demonstrated thoughtful play, managing to hold the balance with tactical means. However, on the move 35 Black made a serious blunder and was left two pawns down in the ending where even bishops of opposite colors could not save the situation.

In the match USA vs. India, a quick draw happened in the top board game between Zatonskih and Harika. On the 2nd board, Sachdev’s K-side attack in an opposite castled position turned out to be much more effective than Foisor’s pawn-roller on the other side of the board. In spite of all this, Americans were objectively closer to a victory in this match, but Nemcova, being two pawns up against Padmini, chose repetition of moves, and Gorti, while making her début in the team USA, had obtained a totally winning position in the middle of her game against Vijayalakshmi, but for some reason decided not to escape checks from the white queen. As a result of all that, India won 2.5 to1.5.

Azerbaijan smashed Egypt four to nothing.

In the men’s tournament, the most interesting matches of the Round 3 are Ukraine vs. Russia and USA vs. China. In the women’ championship, Russia faces Azerbaijan, and pursuers India and Ukraine play against each other. Poland’s opponent is team USA.