Geoffrey Borg: We are always happy to be in Khanty-Mansiysk 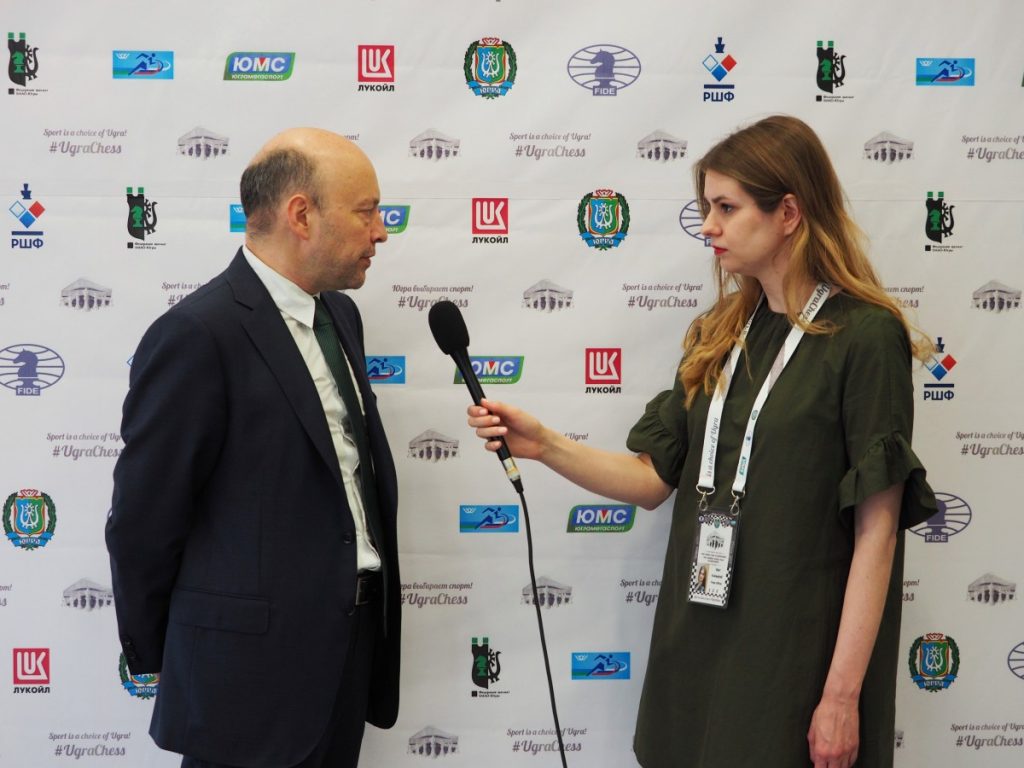 – Geoffrey, please tell us a couple of words about the organization of this event.

– Well, we are always happy to be in Khanty-Mansiysk. We’ve organized many events here, in the last 9 months I’ve been here four times. First time was in September for the World Youth Championship, then we followed up with the FIDE Women’s Grand Prix leg in November. I also was in Khanty-Mansiysk in February for negotiating some things, and finally we are here for this event. Khanty-Mansiysk has a big tradition of organizing events, it has a very experienced team, very easy to discuss and negotiate with. There are all ways of conditions and handling from airport and visas down to the organization of the event itself.

Everything is up to standard, we have a great playing hall. 80 players, sitting inside it, feel absolutely comfortable, they have all the conditions around them. The organizers are very hospitable, and so we are very happy. 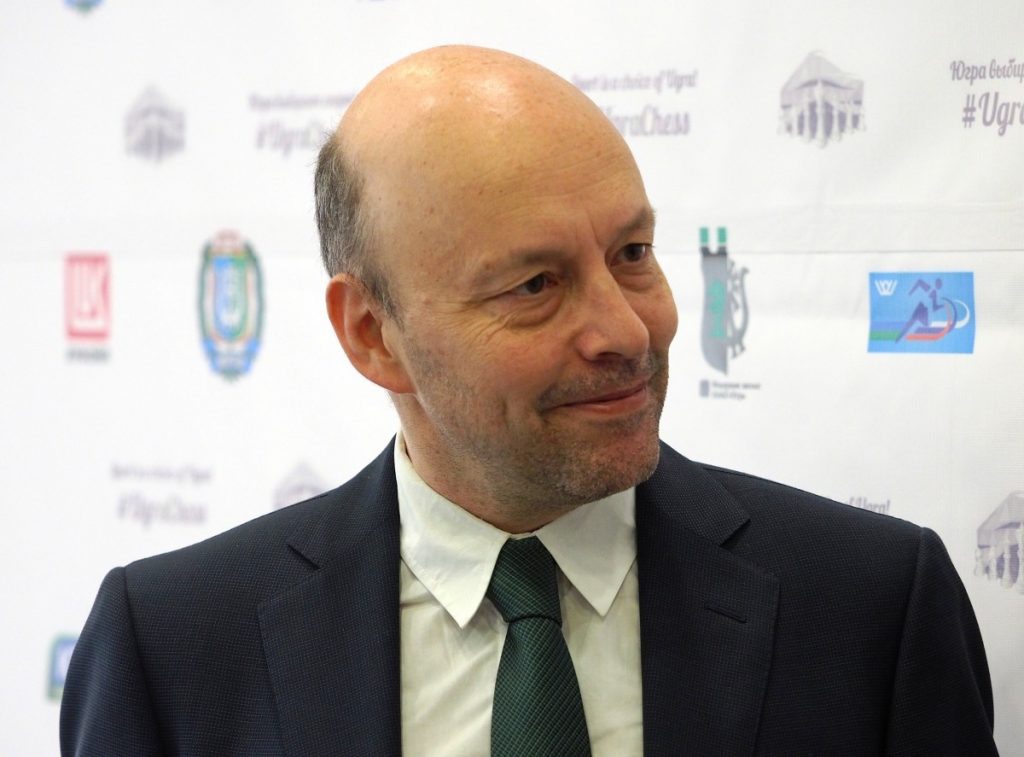 – To what things and aspects do you pay your special attention before a chess event?

– Normally, first I control the lights. Light is the most important thing which I usually check inside every playing hall around the world. I am also looking at space, sitting of the players, facilities around – smoking areas, toilets, catering, accessibility, playing zone. Then, of course, we start looking at non-playing conditions such as hotel, visas, travelling, flights, arrivals and a lot of other factors. But the first thing is the playing hall itself.

– There are many good players here. Whose style do you like most as a chess player?

– Normally I am playing things such as the Accelerated Dragon, very aggressive systems. You have to enjoy your chess. Comparatively here I would say you have some players who like to tempt faith a little bit, like Nepomniachtchi. He is always playing interesting chess. The Indian school is also playing quite aggressive chess as well. Today you need to be a solid player. Whereas in the past you could have played like Ljuboevic, Velimirovic, Tal, who had specific aggressive styles. Today even Nakamura has mellowed a little bit and has become much more complete. Kramnik, when he was younger, played very aggressively, today he is playing Berlin Defense and is very solid. All of them are playing more like “percentage” chess, which means “give me an opportunity, make some mistake and I will try and exploit it”.  I will make +1, +2 or +3 in the tournament if I am really lucky. We can see from Stavanger right now which has just recently concluded: it is a +3 for Aronyan who was playing very interesting chess, and Kaissa was kind to him.

– Speaking about Nakamura and Kramnik, there is a coincidence between Stavanger, Paris Grand Chess Tour and the World Team Championships. How did it happen? And can we improve this in future?

– It is the calendar. Sometimes we do have to change it because organizers may have some force-majeure. In this case there was no such force-majeure but basically the other events came in at a time. We’ve tried to solve it, I spoke to a number of people including the organizers in Saint Louis, we tried to move the events but the calendar is really full. We talked to the Russian Chess Federation as well, because it has its Superfinals and Russian Team Championships… At the end you find that you cannot move whichever way. We went actually even up to November nearly. And then we said “Yes, some teams will suffer a little bit”. Some teams were actually nominated as wildcards and because their players were playing in the Grand Chess Tour, basically Rajabov, Mamedyarov…

– Well, Russians didn’t have too much of a problem because Russia has such a wealth of players, it wasn’t too difficult for them to substitute team members. Russia has a lot of young players coming up like Matlakov and Fedoseev so they gave an opportunity to these players to perform. The problem is with other countries, for example Azerbaijan, who depends on Mamedyarov and Radjabov. They were not comfortable with participating without their number one player. But again, of course, it is an opportunity for many teams to try and give the younger generation a chance. We’ve seen this already. For India it does not matter because normally Viswanathan Anand is not playing with the national team so here they have a number of their top players, except for Pentala Harikrishna, who is playing in the Geneva Grand-Prix leg which starts very soon as well.

– In 2020 Khanty-Mansiysk will host the World Chess Olympiad. Are there any preparations under way now?

– Yes, every time I visit, as I’ve said before I had 4 visits in the last nine months, we discuss with the organizers, with Ugra Chess Federation and with “UgraMegaSport” the developments. Yesterday I have discussed with the Governor very briefly what is happening and they are looking for purpose projects specifically built mainly for this reason. Firstly, they will continue to expand the hotel capacity they have in Khanty-Mansiysk and, secondly, they are planning to build a specific edifice simply for the Olympiad which eventually will serve for legacy purposes and will be used as a multi-sports center. 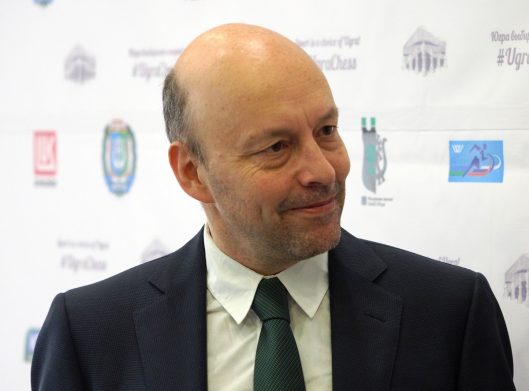 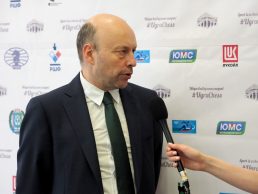 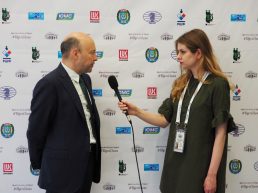